May 07, 2019 Posted by facebookpost
The Lagos State Government through the Ministry of Agriculture, State Taskforce on Environment and Special Offences Enforcement Unit and officers of the Nigeria Police Force says it has seized 30 Tonnes of animal hides and skin popularly known as ‘Ponmo’ presumed to be poisonous and unhealthy for human consumption at a ware house located at College Road in Igando area of Lagos State.

The state Commissioner for Agriculture, Oluwatoyin Suarau,  who disclosed this at a news conference, said a special operation which led to the arrest of operators of the factory  was based on a tip off by concerned members of the public who became suspicious of activities in the ware house where  offensive stench ooze out  during the preservation of the consignment. 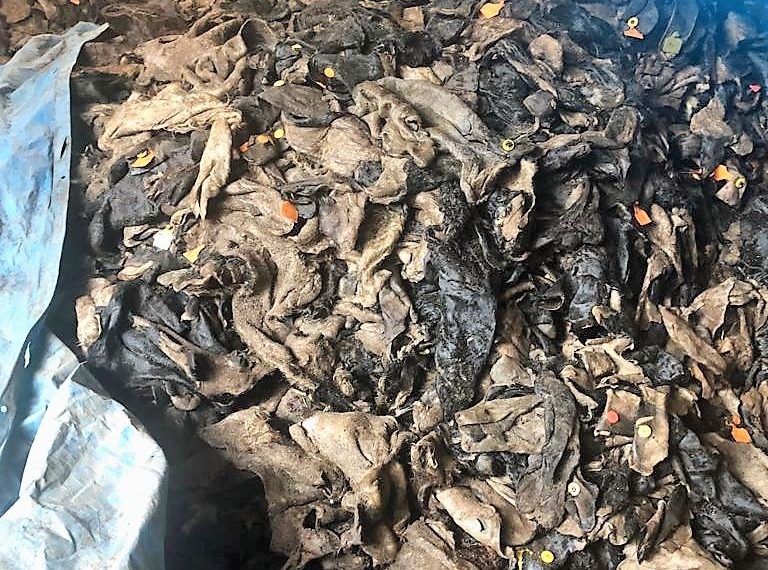 The Commissioner said that the bonfire made with Jamaica rubber, which was also confiscated, in the processing of the ‘Ponmo’ emits a thick toxin smoke which spread within the complex and adjoining neighbourhood adding that the smoke and the unhygienic way of processing the cow skin is harmful to human health.

Suarau while stating that investigation into the source of the poisonous ‘Ponmo’ has since commenced, noted that the Ministry of Agriculture has set up a monitoring and investigation committee headed by the Permanent Secretary, Ministry of Agriculture, Dr. Olayiwole Onasanya to get the source of the poisonous ‘Ponmo’ and dislodge factories and illegal abattoirs where the they are being processed.

The Commissioner appealed to relevant federal government agencies in charge of border patrol to step up activities to prevent entry of the poisonous foods and foods product into the country.

“We will not relent on our oars to ensure that only hygienic meat and meat products are available in our abattoirs and market for human consumption. I therefore used this medium to warn operators of illegal abattoirs and ‘Ponmo’ processing outlets to desist from their criminal activities or risk facing the full weight of the law” he said