Girl Shares The Worst Decision of Her Life, As Boyfriend Dies From Overdose 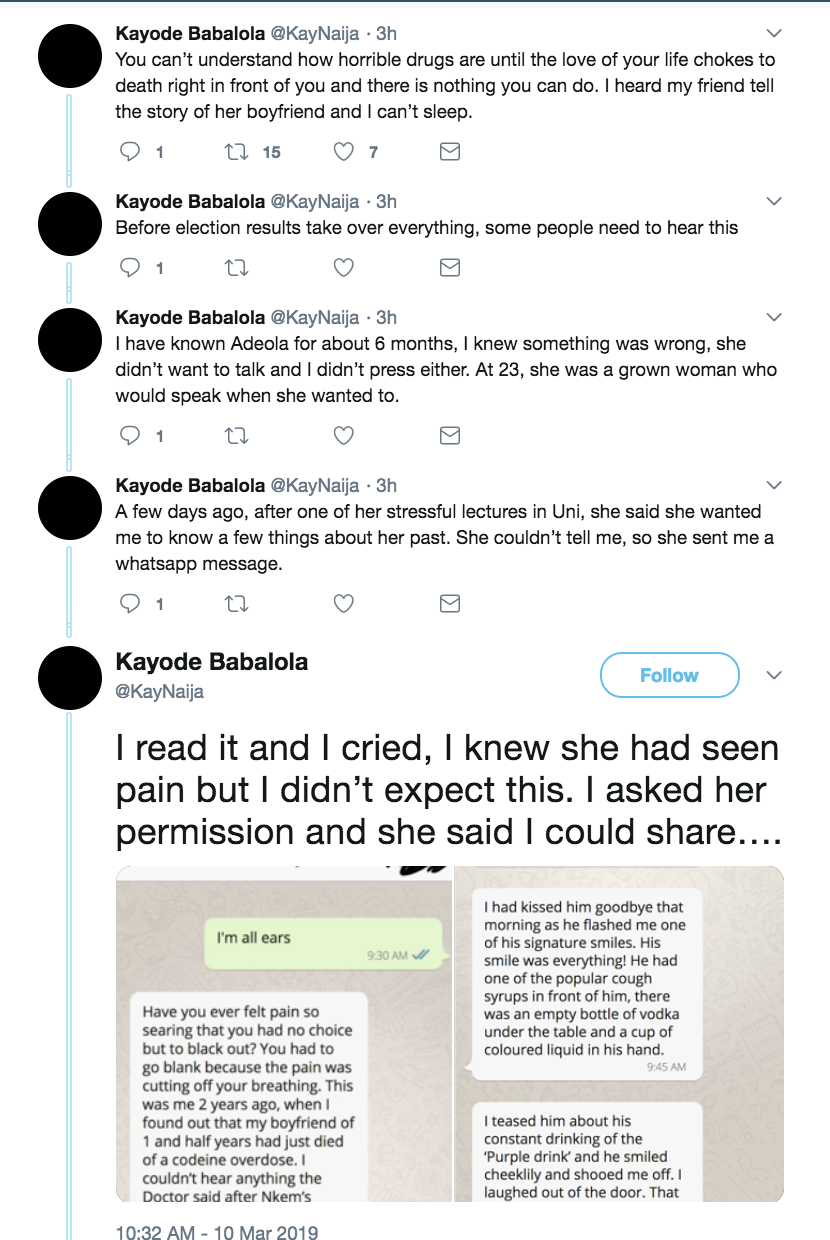 Adeola, 23, shared how she lost her boyfriend, Nkem, of 1 and a half years to the cold hands of codeine abuse. A Twitter user, @wakandascholar - her friend, took her story to social media. She explained that the pain that she felt had caused her to black out when she heard the doctor announce his death.
“Have you ever felt pain so searing that you had no choice but to black out? You had to go blank because the pain was cutting off your breathing. This was me 2 years ago when I found out that my boyfriend had just died of a codeine overdose.”
She remembers kissing him goodbye on the morning of that fateful day as she left for work, not knowing that she would never see him alive again.
“He had one of the popular cough syrups in front of him, there was an empty bottle of vodka under the table and a cup of colored liquid in his hand. I teased him about his constant drinking of the ‘Purple drink’ and he smiled cheekily and shooed me off. I laughed out of the door. That was the worst decision of my life - to laugh and walk away!” 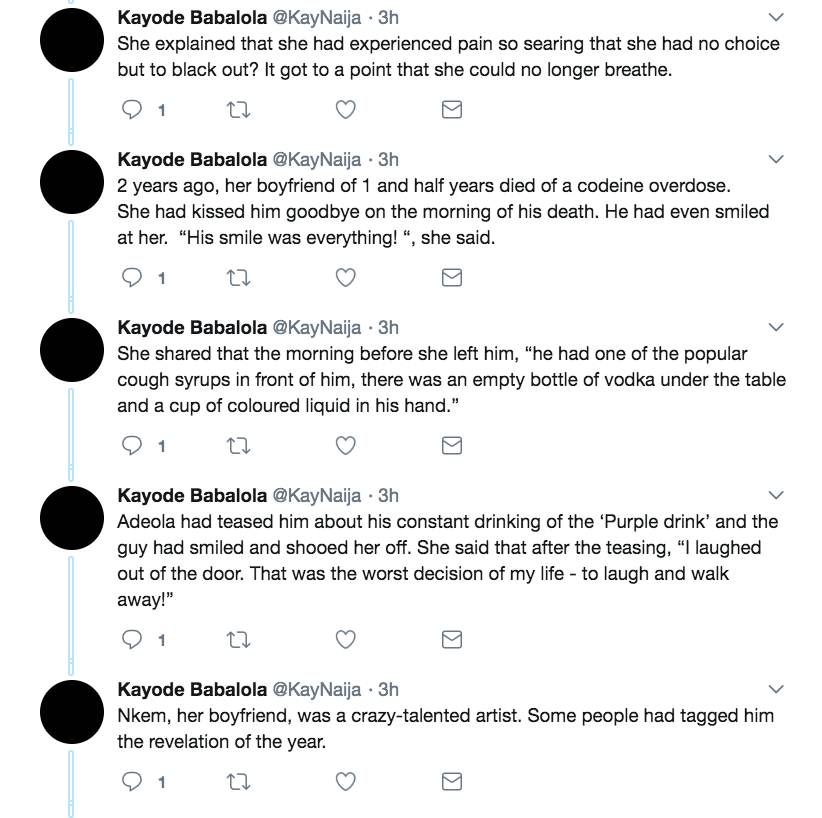 As she talked about her regret, Nana explained that her boyfriend was not an addict.
“He wasn’t addicted. He never misbehaved when he drank. We both knew it was just a fad that would pass. He was an ‘experimenter’ of some sorts”.
She had also tried the mixture but the taste had annoyed her.
“I should have taken that cup from him that morning. I would do anything to go back to that morning. Do you want to know what is worse than the searing pain that chokes me? Regret. Regret is horrible when you can do nothing about it.” 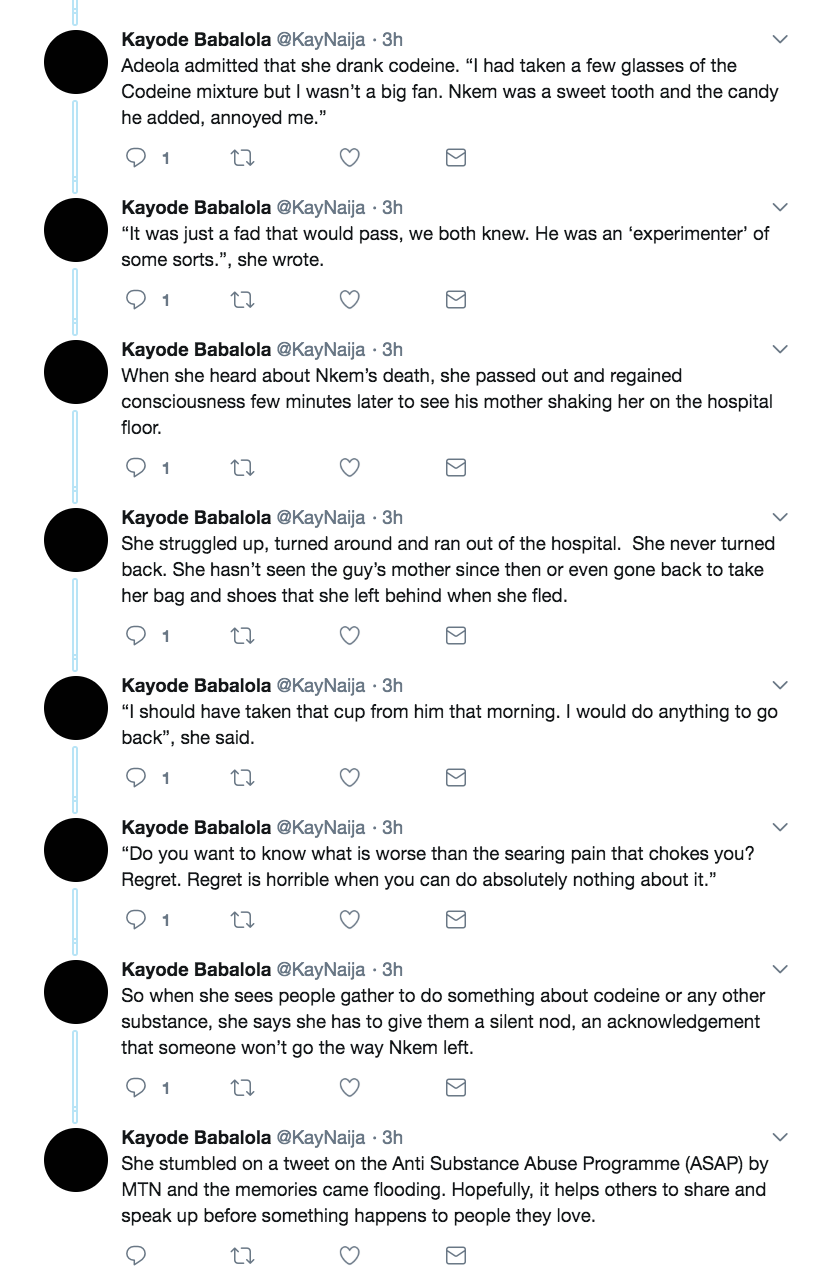 A tweet on the Anti Substance Abuse Programme (ASAP) by MTN had caused her to speak up and share her story.
“When I see people gather to do something about codeine or any other substance, I give them a silent nod, an acknowledgment that someone won’t go the way Nkem did.”
She has found a way to help and has decided to share her story to prevent anybody else she loves from falling a victim. This is Adeola’s message to you. Why not try and save a life today!